Connection pools, these little basic, but mandatory, things we all have in our RPD. For normal usage we generally do not really pay attention to it: enter a host, username and password and done, you are connected to the database and move forward to other tasks.
But … there are still misunderstandings on how they work or how to use them.

Multiple connection pools in the same database but OBIEE always use the first one: why?

Lately saw few times people misunderstanding their role, the relationship between the database object and the contained connection pools and ending up with error because queries were executed against the wrong connection.

For a given database object in the physical layer OBIEE will always use the first connection pool (in order top-down) with a read privilege for the authenticated user when retrieving data for an analysis, prompt etc.

That’s how it works!
You can have multiple connection pools inside the same database object and they can use different database users with different access and you can import metadata from each one and model everything like that. But OBIEE will just ignore all that and use the first one.
The Admin tool will not warn you about it, in the same way it isn’t going to warn you if you don’t have a connection pool for a database. 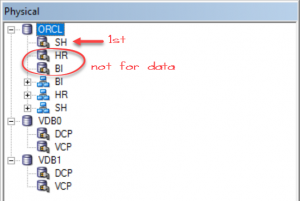 Only the 1st one will be used to retrieve data for analysis.

The general practice is to create multiple connection pools for the same database object to split “data” and “variables” pipes. The first one being used to retrieve data while the second (or all the others) are used by init blocks to initialize variables.

As variables are often initialized at the login it would be a problem if your query is stopped in queue waiting the connection pool to be available because someone is running huge queries.
So, to avoid delays on login. using an independent connection pool which is only used by init blocks is a good practice. Variables queries are generally fairly small and quick and return little data, so there are less chances (as long as the database works fine) to end up in queue waiting for “availability” of the pipe connecting to the database.

This good practice is “enforced” by the Admin tool as by default the option “Allow first Connection Pool for Init Blocks” isn’t checked, meaning that you will not be allowed to select the first connection pool when defining variable init blocks. As it just take a right click > duplicate to have a second connection pool, it’s easy to follow this good practice.