While I was cropping a screenshot for the previous post about Time Series functions in OBIEE I discovered something new in OBIEE 12c I completely missed till now. 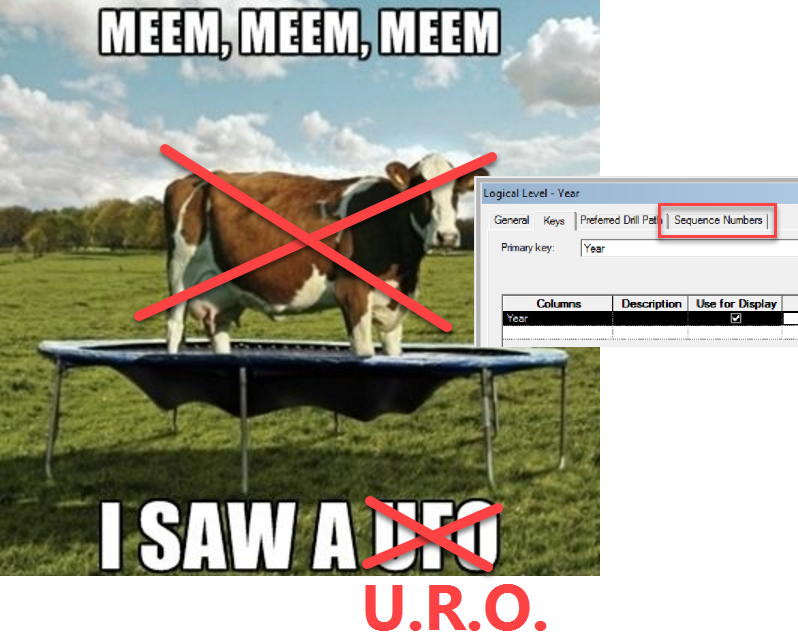 In every logical level of a time dimension hierarchy (except for the grand total level) there is an extra tab named “Sequence Numbers”.

What is this tab and what kind of values does it contain and allow us to change/set ?

Time to look in the documentation….

By default Oracle BI Server uses a complex RANK Physical SQL expression to generate sequence numbers for time dimensions. Adding an absolute or relative sequence number to the time dimension’s logical level provides direct column references in the Time dimension table that contain the precomputed results of the rank expressions. This mapping, while optional, generates a simpler query that is easier for Oracle BI Server to execute against the data source.
(source: Fusion Middleware Metadata Repository Builder’s Guide for OBIEE 12.2.1.2.0)

The doc is quite explicit, going back to the previous post on Time Series functions we saw OBIEE generate multiple queries, the first one uses the chronological key to sort rows and assign a unique number to each one by using a ranking function. So, what these sequence numbers do is replace that step, avoiding to generate a query calling a ranking function.

Let’s see all this more in detail, starting from the beginning…

By default nothing is set and it’s optional

When first checking the tab it’s empty but we can see 2 different options:

First thing to note: the “Relative” part is available only when configuring a logical level having parents’ levels other than the grand total.

Let’s see a practical example to make it more clear and also highlight the difference between absolute and relative. 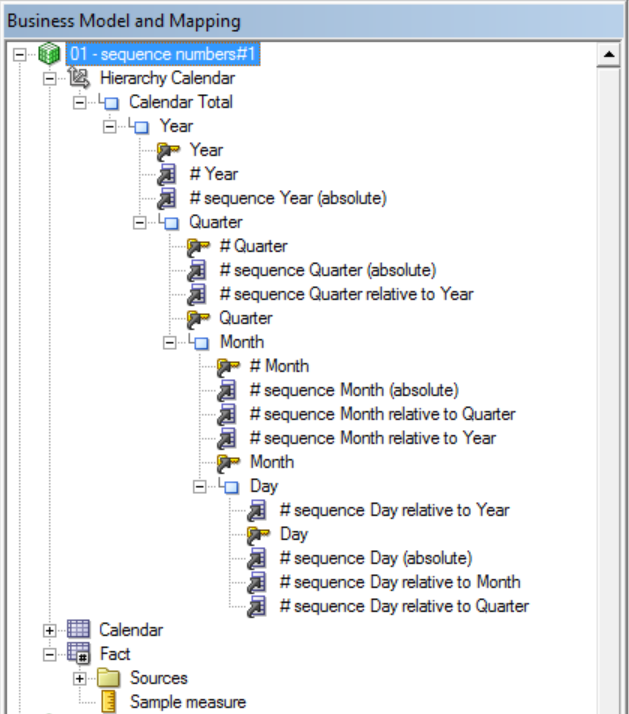 And now let’s look directly at how I configured all the sequence numbers (I defined all of them). 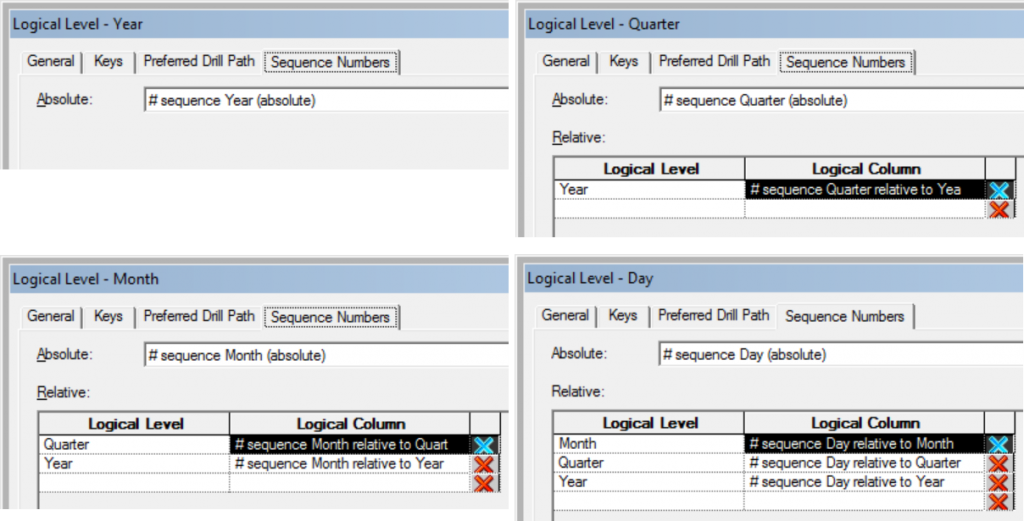 All the possible sequence numbers at all levels are set.

Going down to “Quarter” it’s possible to set an absolute one providing a unique value for any given quarter and one relative. This one is relative to the only available parent level “Year” and so it represents a number being unique for each quarter only for a given year: it’s a number between 1 and 4 for example.

Last but not least, the detail level is “Day”, here an absolute one is possible and 3 relative sequences for “Year”, “Quarter” and “Month”.

What’s different from a value point of view between absolute and relative sequences? 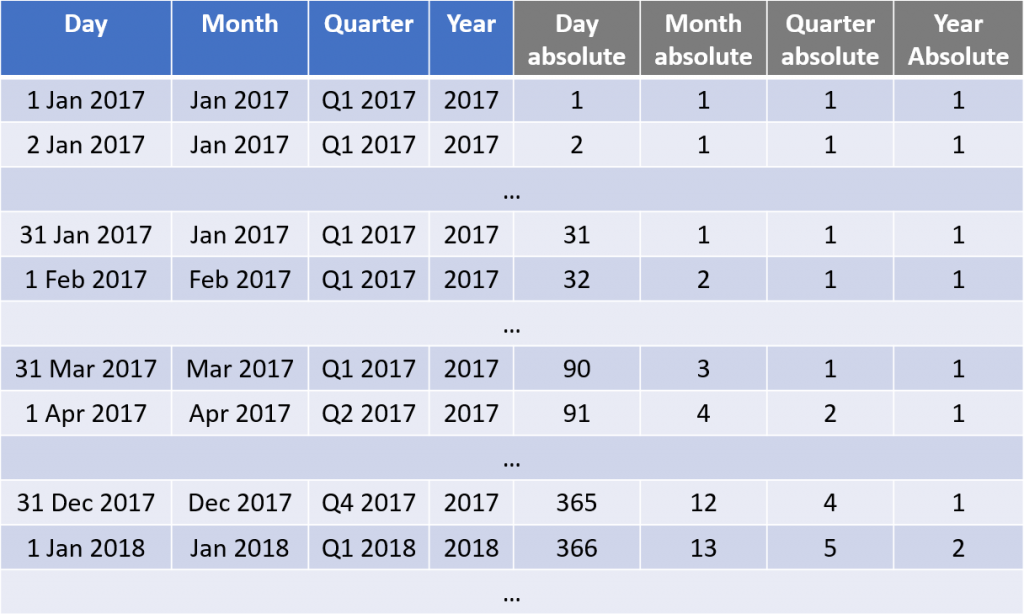 An example of absolute sequences values.

The key element is uniqueness of a value globally in the whole dimension. To keep it simple I started my sequences with 1 all the time (used DENSE_RANK to generate them in the database), but for example for years using the year number (4 digits !!) is also a way to get a valid absolute key.

Also, do not forget that these sequences must not have gaps! If for any reason your model never has the month of December because you are on holidays (I double it, just an example), you can’t skip a number for the not existing month: values must be contiguous. That’s because Time Series functions are done by mathematical addition or subtraction on this number to move backward or forward in time, so OBIEE must not end up on a missing sequence value.

The same rule of contiguity of numbers as the absolute sequences applies here as well: no gaps allowed in sequences!

It is important to always restart the sequence from the same number as OBIEE can use these relative sequences to make sure it is matching the right row when doing calculations at a different level, for example to make sure it’s matching January (of 2017) when doing a “year ago” on January 2018.

Physical query: how is it impacted?

As the documentation “sell” us that sequences can “optimizes time series functions and in some cases improves query time” I’m really curious to see the real impact on the physical query OBIEE generates: how is it difference and “optimized” / “faster” ?

Well … not really a surprise but there aren’t big changes: the DENSE_RANK are gone and the sequences columns are used instead (compare with this). Nothing else really, all the WITH blocks are still there, just retrieving a column instead of calling the ranking function. So the potential of optimization and performance improvements is limited.

Which sequence is used based on the Time Series function?

I didn’t test 1024+ cases to define a model but just looking at few queries and adding some logic the global rule of thumb I saw is the following:

Do not expect this new feature to make miracles! If you have slow analysis with Time Series functions and you set these sequences I suspect they will still be slow because the problem is somewhere else.

Time dimension is generally small (time isn’t relative to your business), a month has a given number of days, a year a given number of month and so on. Time dimension granularity is up to the day (the time component I would personally store it somewhere else instead of including every single second of every day of every year in a time dimension).
So, even if you have have 10 years of data, you end up with ~3650 values. Any database can easily run a ranking on such a small set of data (mainly if you make sure to properly design your table having proper chronological keys). Therefor the performance impact is really relative and limited, Time Series functions being “slow” is mainly time spent doing the aggregations or applying business logic on facts than ranking functions.

If you are a follower of the Robin Moffatt’s school for performance in OBIEE, details here or here, you will be able to clearly analyse and quantify the impact of these sequences numbers on your analysis.
If you were hoping for an impact like the miracle switch “please_go_super_fast = 42;” in the nqsconfig.ini file of OBIEE , better to continue to hope, doesn’t cost anything … (we all agree such setting doesn’t exist, right?)

But don’t get me wrong: it will not make it any worse, I can hardly imagine worst performance using sequence numbers compared to ranking functions called live on the chronological keys.

Is it worth to create these columns and set them in the RPD?

The time dimension is a quite static and small, so adding more columns, even if it can easily be lot of columns (I only have Year-Quarter-Month-Day and I have 10 extra columns in the dimension for sequences), is cheap and a one-shot activity. It’s simple columns, numbers, generated by ranking functions without requiring extra business logic (nothing you don’t already have in case you manage multiple alternate calendars like a fiscal one etc.).

The cost and time effort to create these columns in the database and populate them is so little that it’s worth to do it also because it will prevent strange Time Series functions behaviours because of a wrong or missing chronological key. When designing the time dimension you have less chances to select the wrong sequence than the wrong chronological key.

You can also decide to only create few of them if you want, they are all optional and nothing mandatory, but I still believe it’s better to be consistent and if you start, make it everywhere. In this way you can expect a more consistent behaviour on the OBIEE side with similar queries being generated (will make your life easier when trying to debug things).

Share This
We use cookies to ensure that we give you the best experience on our website. If you continue to use this site we will assume that you are happy with it.Ok